The landscape I can see from my house, in Galiza.

When somebody talks about Spain, you probably think about sunny weather, flamenco, bullfighting, paella and sangría. The same way when somebody talks about Italy, non-Italians think about pasta, pizza, gondole and gladiators. Obviously, the reality is much more complex. I am from Galiza, a country that lays in the northwestern corner of the Iberic Peninsula. And there, few spanish cliches take place. Our land is the first one that the Gulf Stream finds after crossing the Atlantic ocean. Because of that our weather, normaly, is very wet and rainy during winter, and sometimes, also during summer.

If we add to this an orography full of small rivers, valleys and low mountains, you would expect to find a landscape dominated by the atlantic forest. Oaks, chestnut trees, birches and pinetrees across the valleys, and low vegetation over the mountains. But in much of Galiza, things are not like that. There is a tree that seems from a tropical forest, growing everywhere: the eucalyptus. 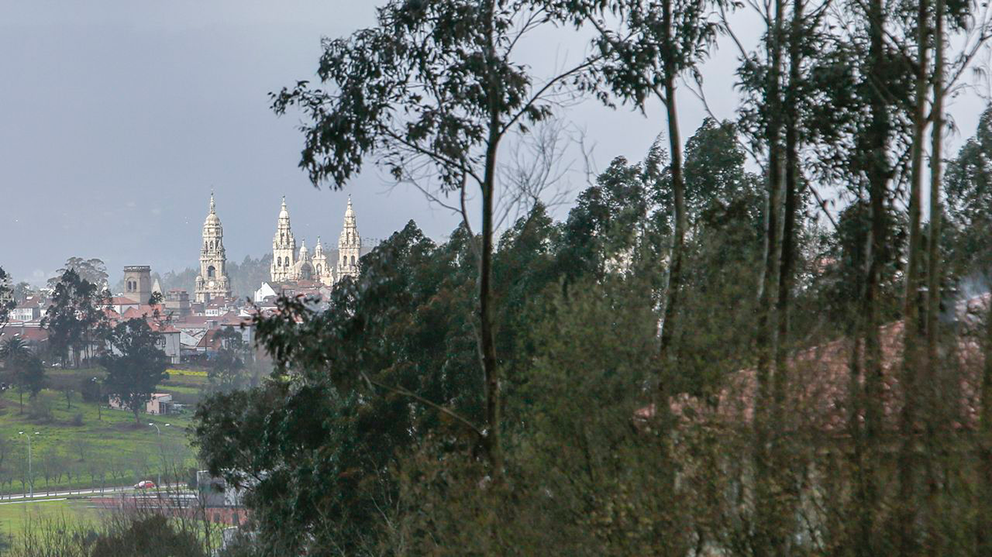 We know by this name a vegetal genus from Australia that covers several hundreds of species. The first descriptions by western explorers were made in the 16th century and the introduction in Europe took place in the 18th century. The first eucalyptus out of a greenhouse of the continent was planted in the Royal Palce of Caserta in 1792. In the Galician case, the scientists Francisco Javier Silva Pando and Rubén Pino Pérez found documentation that placed the first plantation of the genus around 1850.

Things have changed a lot since the mid-nineteenth century. From exotic curiosity and ornamental element, it has come to be a serious environmental problem. As of today, and according to data from the Xunta de Galicia (Galician Government), the eucalyptus occupies 425,000 hectares, or in other words, 14% of the total area of the country. How did we get to this situation? Well, largely, thanks to the extraordinary features, almost superpowers, this tree has. 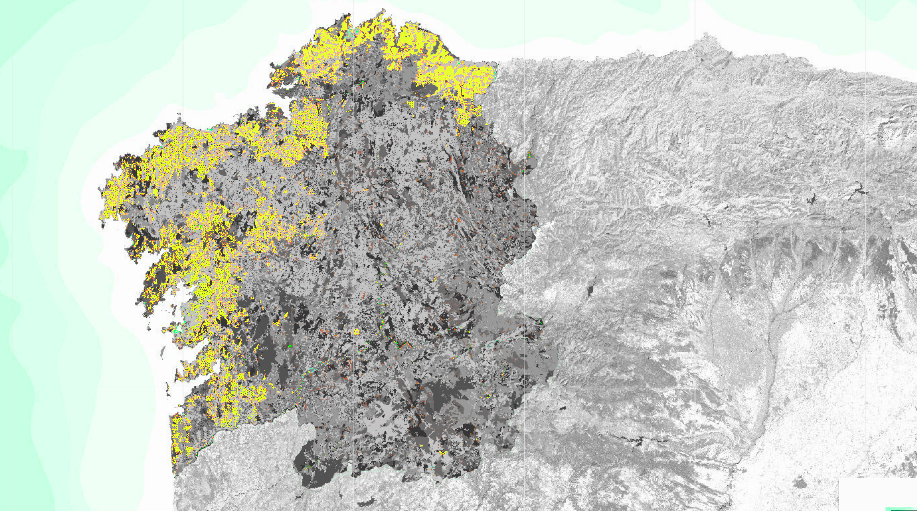 The first one is an incredibly fast growing. A 4-year specimen of the Globulus Labill. species, the most common in the Iberian Peninsula, can reach 15 meters height. A popular proverb says: “plant eucalyptus for you, pinetrees for your children, and oaks for your grandchildren”. That’s why it was a very attractive species for reforestation and wood production, and the plantations spread as fast as the tree grows.

Growing that fast requires a lot of resources. Thereby it is a tree that consumes many liters of water, suitable for the drainage of very humid terrain. In many places, such as Italy, the formation of sources of infection was avoided this way. And in Galiza, as I said, it rains a lot, so this talent should not be a problem. Right?

We could also say that it has the ability to resurrect. If you cut a specimen, the sprouts will appear on the stumpin a matter of weeks, and the tree will grow as fast as the first time. The same will happen if there is a forest fire.

And if all that were not enough, it produces oils with medicinal properties to which we owe that characteristic and pleasant fragance. So? What could go wrong with a super tree that also has a good smell?

Well, it turns out that these oils are highly flammable, and in addition the crust is thin, light, and grows spirally. Eucalyptus is a tree designed to burn, what in scientific argon is known as a pyrophile plant. Furthermore the leaves thar cover the ground after falling, contain allelopathic substances, chemical compounds that avoid and hinder the growth of other species. The very economically profitable eucalyptus has been planted massively. Without any natural predators, its expansion without control began. The autochthonous trees lost ground and they have a hard time to get it back, because they cannot compete against all those adaptations.

A house near eucalyptus, during the wildfires wave of on Octover 15, 2017. Fonte: rtve.es

The trouble is that Galiza has more than a third of toponyms of whole Spain. That is, the Galician population is very scattered. A pyrophile tree surrounding thousands of small population centers, is no longer an environmental issue, it is a human issue. As an example, the fire that killed Maximina Iglesias (86 years) and Angelina Otero (78) in the village of Chandebrito on October 15, 2017.

There are many voices against eucalyptus. Some ask to take solid legal measures to help improve the situation. They take as an example the case of our brother country, Portugal, where the government has forbidden the reforestation of burnt forests with the Australian tree. There are even Brigadas Deseucaliptizadoras (de-eucalyptization squads): groups of people who gather to cut off and prevent the progress of the eucalyptus, at the same time that they sow autochthonous species. 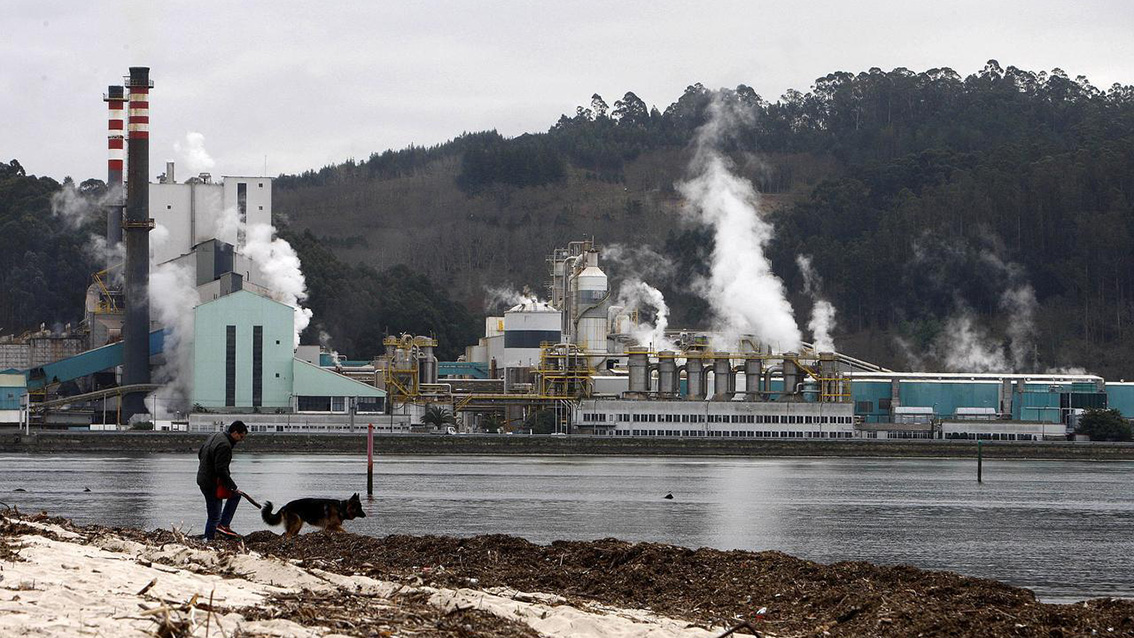 But eucalyptus has on its side very powerful agents: the wood and paper companies. They are the overexplotation great benefeciaries, and they exert so much preassure that, beside all the evidences I tried to explain in this article, the Spanish Ministry of Environment does not consider eucalyptus as an invasive species. In fact, ENCE, a large paper industry company in the Pontevedra estuary, famous for the environmental impact of its facilities, received from the government of Mariano Rajoy an extension of its license until the year 2073.

We live in a time in wich even the scientific truth can be bought. In which the stock market price weighs more than Maximina and Angelina and their lives suffocated in a van surrounded by the fire. Yes, the eucalyptus kept warm the houses where my grandparents and parents grew up, and many others. It produced and produces job. But that does not mean that there is no need to stop it, look for alternatives and defend our native ecosystems.